One of my friends said recently that October is a crazier month than December if you have kids. There are all the Halloween costumes, crafts, and baking to do, plus activities at school, both in the classroom and on the weekends. And if your kids are really little, there is the requisite trip to the pumpkin patch.

Two years ago when my three kids were in three different schools, I just about went nuts. Each had their own Halloween/fall festival (one had a fall festival AND a Halloween carnival), and back then I was trying harder to be the mom who does everything. (I was failing, though, even with my best efforts.)

Now things are a lot easier with all of them in one school. But between the blog and starting my own business, I still didn’t get the decorating done. I could barely even manage the baking, which is probably my favorite part of any holiday. So I decided to do my baking lazy-style this year. Why not?

Lazy baking to me can be summed up in two words: Ghirardelli brownies. Yum, yum, and yum, and so easy. I make them straight up (except I use a combination of butter and coconut oil in place of the vegetable oil called for on the package), and I have a chocolate mint version, which I’ll share as the holidays approach. So it was a no-brainer to come up with a Halloween version as well.

Making a spiderweb pattern with a toothpick is about as sophisticated as my decorating-with-frosting gets. I love it because it’s easy and looks great. I lined the pan with parchment paper because I wanted the finished product to be Pinterest worthy, but you could skip that part—after all, this recipe is for lazy days!

Grease an 8-inch round pan (or other size, see note below) and line bottom and sides with parchment paper (if desired). Preheat oven to 325°F.

Mix together egg and warm water in a large mixing bowl. Mix in melted butter and oil. Add brownie mix and mix until blended. Pour batter into pan.

Beat cream cheese until soft. Add sugar and Greek yogurt; mix until blended. Spoon mixture into a pastry bag, Ziploc bag, or any type of clean disposable bag. Snip off a very small part of the tip of the bag (or one of the bag’s corners).

Gently squeeze the mixture onto the top of the brownies in a pattern of concentric circles, starting with one tiny circle in the middle and then making gradually larger circles. If when you are finished you have some of the mixture left over, you can retrace some of your circles until you have used it all up. Drag a toothpick from the center of the pattern to the edge and repeat three times, at the north, south, east, and west positions, so to speak, cleaning your toothpick on a napkin as you go. Then drag the toothpick from the outer edge into the center and repeat three times, at the northwest, northeast, southwest, and southeast positions. 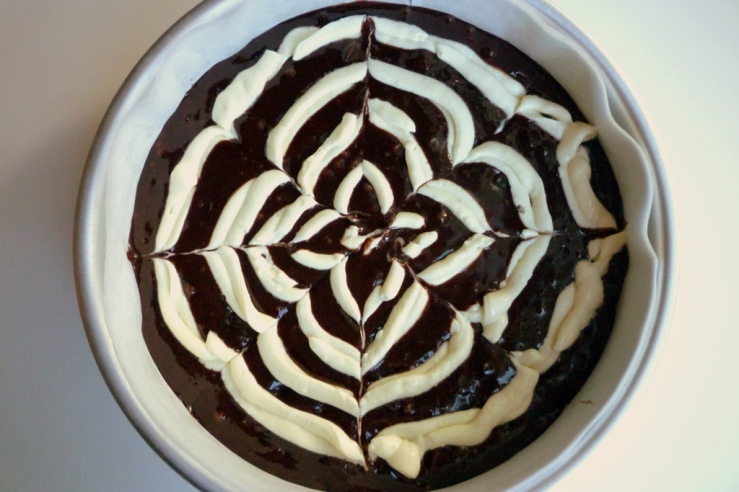 Bake at 325°F for about 42-47 minutes, until edges look done and the center looks set. Cool in pan on wire rack until cool. If you used parchment paper, then remove from pan by loosening sides with a knife and then gently turning pan over onto your hand, using your other hand to tap on the bottom. Remove parchment paper, turn right side up, and wrap in plastic wrap until ready to use.

I buy my Ghirardelli mixes in a set of 6 from Costco. It’s an amazing deal; it works out to less than $2 per mix.