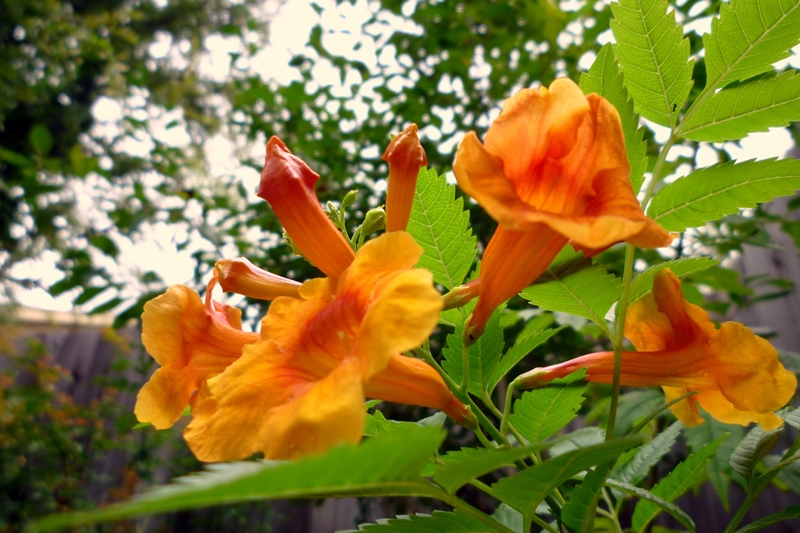 Our house has a square of a backyard, and when we first moved in, that square was made of dirt. After a few months we laid down sod, and in the five years since then we’ve been adding to our baby garden a plant or two at a time.

But that doesn’t mean I know anything about gardening. I don’t. And I proved it by planting this orange esperanza last fall and then just leaving it to fend for itself during the freezes we had last winter. I figured it could handle it. But when all of its leaves crackled and browned and fell off, I realized I’d figured wrong.

All winter it sat there, a sad Charlie Brown twig sticking out of the ground. But my mom said to leave it alone. It might come back, she said. I didn’t think so, since it looked about as dead as a brittle brown twig can look. But I left it alone just the same.

Until one day, a little green leaf stuck itself out of the twig. What was this?

You can probably guess what came next: more, more, and more leaves, until lo and behold, today I look into the back yard and there are actual flowers! The first flowers I’ve ever seen on this plant, and look at them. Gorgeous.

Please forgive the English major in me for seeing metaphor in the dead twig to flower turn of events; I’ve been thinking this thought all week, and then these flowers bloom and give me a visual for my thoughts:

Sometimes you might have something going. It might be really good. As in, a whole cluster of vibrant orange flowers good. But let’s say the good thing is hidden—trapped in what looks to the outside world like a twig bound for kindling. Well, that’s OK. Just know this: only you can see it. Don’t expect anyone else to know that goodness is in there. You can get it out of you, but it’s all on you. Just keep watering that twig, and one day those flowers will bloom, all by themselves, when they’re ready.

And if you don’t believe me, maybe you’ll believe nature. Those flowers are called esperanza. Do you know your Spanish? Esperanza means hope.

4 thoughts on “The Hope that Only You Know”