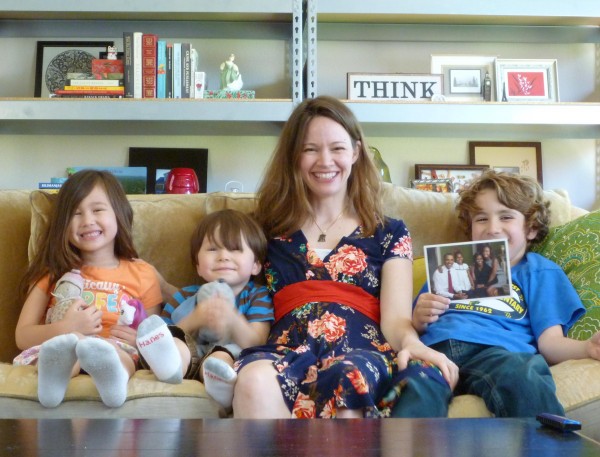 This afternoon I will go out and buy some quality, old-fashioned stationary at the one store in Austin that still carries any. Then I will write all 1,000+ of these words out and mail them to our president. Will anyone besides the intern with the Santa-sized sack of letters read this? Doubtful. Still, it felt good to write. And I mean it.

On May 1st, you fulfilled your duty to the spouses and children, mothers and fathers, friends and neighbors of the nearly three thousand people who died on September 11, 2001. It is clear from the words spoken, written, read, and overheard across the country that Osama bin Laden’s death has provided much-needed closure for a great many.

Now, a week later, it seems as though we have awakened from a decade-long dream. In the wake of our great exhalation of relief swirls an eddy of questions: What will you do now that Bin Laden is dead? What will the next era of American history look like? What kind of country will America be now?

I was nine months pregnant with my first son when our country began a war with Iraq in 2003, a war that was supposed to last one month. We celebrated my son’s eighth birthday last week. His country has been at war his entire life. One day, perhaps soon, this harsh reality will dawn on him. He loves this country and is proud to be an American. I do not want him to come to equate the country he loves with something as destructive and as foreign to his childlike innocence as war.

The rules of our world are changing faster than we can adapt. America used to imagine herself a lone explorer, striking out alone in the West. Now the world has grown smaller, and we are so interdependent, not just with our fellow Americans, but with our neighbors abroad. Our food, our clothes, our cars, our debt, our currency—it seems there is no part of our daily lives that doesn’t involve a foreign country.

Now in this time when we find ourselves so connected to others, the definitions of “self” and “neighbor” are starting to blur. What was once without is now within. Considering this new reality, we must ask ourselves, how much benefit do we receive from the actions of war? How much security within do we receive from sewing the seeds of violence without?

In this new era, we cannot cling to the old ways of relating to those who live outside our borders. We must see their faces and hear their stories. They need not be our best friends, but we can no longer afford to see them as so different, so much the “other,” that we ignore or even condone their suffering.

At home, American military personnel risk their lives and their families’ futures to defend our country, often to tragic end. Abroad, people of all ages, all stations, all walks of life, suffer at the hand of war. The cost of war is high. All around the world, families grieve for their children, children cry out for their parents. This is the legacy of war, and this is the struggle we must turn our attention and our intentions to now in this new era.

We the people of the United States have woken up from a dream, but we may not yet know the hidden meanings of the dream’s message. We need you to guide us to a new clarity. A great leader is one who takes his or her people where they need to go, but didn’t know they needed to go. A great leader has the vision to lead us to a better future, even if that future at times seems foreign, frightening, and impossible.

Our world population is growing at a rate that boggles the minds of scientists and school children alike. Our planet groans under the strain of its inhabitants and our destructive actions. A husband shatters from pressure and strangles his wife. A mother stares into the empty face of madness and drowns her children. A broken child lashes out in anger and shoots his fellow classmates. We see these stories and more on the news and shake our heads in disbelief.

But this destruction is simply a microscopic version of the destruction that occurs regularly on a global scale. Mistrust, misunderstanding, and miscommunication lead to war. One country sends planes with bombs to set fire to another. Religious leaders preach hatred in the name of God. The violence of the macro bleeds down onto the micro—the level of the husband, the mother, the child—and the cycle begins again. Now, more than ever, we need peace.

The search for Osama bin Laden, for you, was an inherited fight. Now that your duty is complete, you are free to move on to work that is meant for you alone. You possess the ability to understand complex situations in all their layers of nuance and then communicate the right and moral course of action. This is a rare quality, and it calls to mind a previous president, Abraham Lincoln. You were elected, I believe, because of this ability. Traditionally, it seems, the voting public prioritizes other characteristics in a president. But in 2008, we found ourselves far from our chosen path, and we knew we needed a leader that could guide us home.

The shock and pain we felt on September 11, 2001, birthed a decade of hurt, anger, fear, and violence. The United States was wounded, and the raw emotions vocalized this past week, nearly 10 years later, speak to the depth of that wound. We need a president who can help us heal this wound, not through further violence, but through peace. As families of murder victims often say after the killer has been put to death, vengeance brings a certain measure of comfort, signifying the closing of a chapter, but vengeance does not end the suffering. It does not bring back the dead, and it does not bring peace. Peace requires a new set of actions: actions of listening, of opening, of understanding, of love.

President Obama, I am a wife, a mother, a daughter, a sister, and a citizen. I am no perfect person, and I certainly don’t have all the answers. But I know we need peace in this country. I know we need peace in this world. The new millennium has dawned, and yet we find ourselves still slouching towards Bethlehem. Many rejoiced the day you were elected, saying your African-American heritage was a legacy that would ensure your place in history. As moved as I am by the historic nature of your presidency, I believe your legacy will be much greater still, and remains to be seen. I believe you have the power to lead our nation into a new future, a new identity, a new reality. I believe you have the capacity to lead us to peace.

Thank you for walking the long and lonely road in service to our country. May peace and understanding be your guides.

2 thoughts on “Dear President Obama: A Letter for Peace”