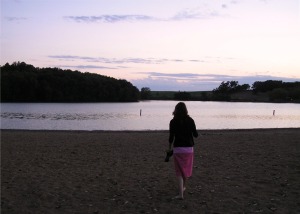 When I grew up, our house sat overlooking a small but beautiful lake in Iowa. I have so many wonderful memories of that lake—learning to swim, dangling my feet off the end of my parents’ pontoon boat, ice skating in the winter, and floating in the canoe with my dad at dusk while he read to me out of The Lord of the Rings. Water left the lake through a small stream, and in the summer my dad and I would walk down the stream and pick mulberries off low-hanging branches. When I was a bit older, I was allowed to walk to the beach by myself. It was a very small lake and a very small beach, and on some days I was the only one there. It was so peaceful, lying there on the sand, just being. I don’t know how to say this without sounding ridiculous, but it was almost as if that lake was my friend.

When I was 14, my family moved to Texas. I didn’t see the lake again until 17 years later. My husband Bobby and I were first and madly in love, and I convinced him to let us make a brief detour from our Michigan to Texas road trip so I could show him where I grew up. The brief detour turned out to be a huge detour, and by the time we got to the lake, it was dusk. I showed him the beach (that’s me on the beach in the photo) and the stream where my dad and I picked mulberries. It was an amazing experience, coming back on that day and sharing my past with my present, one I doubt I will forget. There was an enormous harvest moon, the air was warm and close, and the cows in the nearby fields, believe it or not, were mooing all at once. I felt so filled with love and gratitude for Bobby for agreeing to drive for hours just to see a tiny lake for no reason other than that I used to live there. Standing next to the water, we kissed (the cows serenading us in the background), and I felt the most powerful feeling—as if all these distinct parts of myself had suddenly merged, and I felt a deep sensation of peace and connection to the air, the water, the grass . . . even the cows.

Over the years, two different jobs have taken my daily commute over Austin’s 360 Bridge, our own mini version of the Golden Gate Bridge, more for its iconic status as a visual symbol of our town than for anything else (my husband is mocking me right now for even making the comparison). Yes, it’s smaller, and it’s not suspended from cables so wide you can walk on them, but we Austinites love our 360 Bridge, OK? (You also don’t have to shell out the cost of a Big Mac & fries to cross it either, so take that!) But I digress. During those years that I would cross the 360 Bridge twice a day, I would get a great amount of satisfaction from gazing out my window at our lovely Lake Austin passing below. Perhaps it took me back to memories of my own lake, growing up in Iowa . . . I don’t know. All I do know is that, in the midst of all those feelings of affection and appreciation for this fleeting glimpse of water, I began writing a poem. I don’t usually write spontaneous poetry, so this was odd enough. But the weirdest part was that the poem was in Spanish. That is very odd. I took Spanish classes in high school and even studied abroad in Spain for a semester in college, but I am definitely not fluent. But the first three words just came to me one day, and then the fourth, and then every so often another line would come to me. The whole thing was so simultaneously natural and strange that I now have a great affection for this tiny poem, even though it’s probably written at the level of a 2nd grader. My friend Daniel, who is a native-born Spanish speaker, was kind enough to proofread it for me. Now I’d like to share it with you. Happy 2010!